Trumpy Bear, the Build-a-Bear knockoff raised in hell, is here to stay! You absolutely need to watch this bizarre commercial for this even weirder toy ASAP. 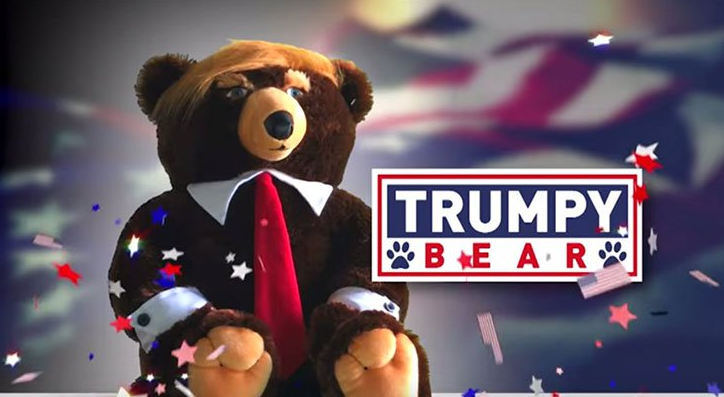 Greetings from your nightmares! There’s a 100% real toy on the market called Trumpy Bear, which is pretty much what you’re imagining: a teddy bear with an orange combover and a tiny suit to look like President Donald Trump. The bear itself is weird enough, but it’s amplified by its absolutely insane commercial, some kind of horrifying abomination of a marketing decision made during a bad acid trip. “The wind whispered through the forest. A storm is coming…you cannot defeat the storm,” a booming voiceover says as we’re shown a forest with a grizzly bear poorly photoshopped in. “From the trees rose a resounding voice: ‘I fear nothing. I come when the Trumpet sounds. I am the storm. The great American grizzly.’” Cut to a goofy stuffed animal wearing Trump cosplay, covered in red, white, and blue confetti. Trumpy Bear is here.

It’s hard to believe that this isn’t one of Tim and Eric‘s Cinco Toys sketches or a fake Saturday Night Live commercial. This is a real product that you can buy for just two installments of $19.95, folks. Snopes confirmed that Trumpy Bear is also not a satirical toy making fun of MAGA supporters. It’s made by Exceptional Products, the company responsible for things like Hairdini, Save a Blade and Plaque Attack. Their vision statement for the toy is “not a joke,” as they told Snopes. It reads, in part: “In 1902 the teddy bear was born and named after President Teddy Roosevelt. When President Donald Trump was elected to office as the first non-politician president, I felt it was time to name an American fearless grizzly bear after our new Commander in Chief. I designed the Trumpy Bear in a recognizable image of our current president.”

There are no words to truly describe the insanity of the rest of the commercial, but we’ll try. Trumpy Bear was born on Flag Day. You can unzip his head and pull out a blanket that looks like the American flag. Trumpy Bear has then hung half-mast on a flagpole, and set on a counter next to a decaying photo of a WWII soldier and his medal of honor. “God bless America, and God bless Trumpy Bear!” an elderly woman yells as she hugs the toy in front of another flag. Trumpy Bear is also enjoyed by a grown man who puts him on the front of his motorcycle, and another man who brings him along in his golf cart. “When I ride with Trumpy Bear, he makes my golf game great again. Thank you, Trumpy Bear,” he declares with a smile.

Still with us? It gets worse. A woman combs his hair and places him in a seat of honor in her home, kind of like that haunted porcelain doll the nanny is forced to take care of in The Boy. A nondescript businessman declares that the bear, which now has magic powers, makes his business deals better. “I love you, Trump Bear!” Oh great; now the bear has a tiny MAGA hat. The commercial notes in the fine print that the president hasn’t endorsed this product. Trumpy Bear isn’t actually a new toy. The commercial first surfaced in October 2017 but went under the radar. When it ran last night (November 11) on Fox News, people took notice and freaked TF out, as they should. Fox News’ Senior Vice President of Eastern Sales, Dom Rossi, told HollywoodLife that “This was a local ad purchase with the cable operator. We do not do business with them nationally.”

The reactions ranged from people noting that you could make some…customizations to the toy. It’s hilarious, but remember — you’re still paying $40 for the Trump toy and not owning anyone if you buy it. Other reactions ranged from the dismayed (“I was told in the 70’s we would have flying cars by now. I want flying cars,” per @PinkIguana11) to dunks on the president. “Trumpy Bear is going to get its bear butt kicked by Pooh Bear. Pooh isn’t afraid of rain and he has real friends in high and low places,” @Ndreajess tweeted. “Are they full of s**t and KFC scented? Curious about how disrespectful it is to shove an American Flag up a bears backside is to the folks who are very concerned about the treatment of our flag,” wrote @FMPreachersWife. Damn! 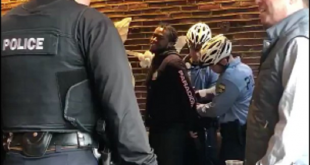